We welcome you to the wonderful region of Samogitia where on the shore of Plinkšiai Lake the luxurious and stylish Villa “Dubgiris“ opened for guests in 2012. For your relaxation and entertainment, the area of a homestead with a size of 4 ha has been prepared, with green lawns, pleasant pine forests, full fish ponds and, of course, unique on the coast of Plinkšiai lake. Villa „Dubgiris“ is a complex of 4 buildings: Guest House “Briedžio guolis” („Elk Bearing“), “Paukščiukų” („Nestlings“) apartments, SPA and bath complex, Pobūvinė (Banquet Hall) and “Uošvės trobelė” („Mother-In-Law‘s Hut“). In the main hall of the Guest House “Briedžio guolis” („Elk Bearing“) is an impressive collection of trophies, hunted and brought from various parts of the world – Europe, Siberia, Far East and Africa. The Guest House offers 2 luxurious apartments and 12 double rooms, which numbering is not usual.

Each room is named after different wild animal names, and the style is chosen for the interior according to the wild animal’s way of life and environment. In the next homestead building, there are 3 apartments, which also do not have no ordinary numbering. Each apartment has the name of an different bird and rooms are dominated by the particular bird theme. For lovers of the baths Villa „Dubgiris“ can offer a cozy, private and small bathhouse complex where you can enjoy a Finnish sauna with steam and without steam, as well as a Turkish bath. For those who want to relax, we offer a jacuzzi, a massaging stone path, a heating bench, various fun showers, a massage and a relaxation room. The Villa‘s banquet hall Pobūvinė features sophisticated luxury, the enchanting flawless and delicate interior.

In this two-storey, luxurious banquet hall, we can hold any of your celebrations, and a professional kitchen, the main attraction of which is the game, will offer you various dishes from traditional Samogitian to gourmet and not yet discovered. For trainings and seminars, on the second floor of Villa‘s banquet hall Pobūvinė there is a comfortable Conference Hall with all the necessary conference equipment. Slightly secluded is the log builted “Mother-In-Law‘s Hut”, which has a Russian bath with a big dressing room, an outdoor terrace with a fireplace and stunning views of the lake, comfortable bedrooms, a spacious kitchen and living room with fireplace. On the Villa’s carefully tidied territory you will find ponds full of fish. There is a fish observation place, and your own catch fish, we will immediately prepare and serve on your lunch or dinner table. You can enjoy the tranquility of the built bird-watching tower. You can enjoy the time to relax in the summerhouses and in an Island Hut, located in the middle of the pond. Active leisure guests can enjoy water cycling, boating, kayaking, canoeing and paddle-boarding and admire the spectacular landscape of the Plinkšiai lake. For those who want to explore the surroundings and its famous sites, we offer cycling, and we offer basketball, volleyball and table tennis at the sports ground for those who like emotional games. For the youngest guests, there is a playground with lots of climbing facilities and swings. Villa „Dubgiris“ is a place where you can relax and regain strength after hard work and experience unforgettable excitement. 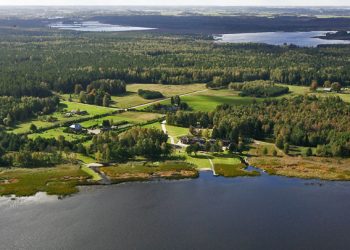 The village of Uikiai, where is the place of Villa „Dubgiris“, is located in Mažeikiai region, Seda locality, Plinkšiai Landscape Reserve terrain, Natūra 2000 landfill. The territory of Ukiai village from the east is surrounded by the magnificent beauty Plinkšiai lake, on the northern part of the lake flows Domija river, on the western part there is Uikiai forest, through which the Seda – Telšiai road passes. Historical sources say, in the end of the sixteenth century the nobleman Jonas Karolis Chotkevičius laid the foundation for the Uikiai village for the Diocese and Seminary of Samogitia for a debt. This was the first case where the village name was captured in historical documents. At the beginning of the last century, Uikiai village dwelling-house had 5 inhabitants and there were 96 inhabitants in the very village. The largest number of inhabitants was recorded in the year of 1923 – 111 inhabitants. Currently, the village of Uikiai consists of 10 homesteads. The Uikai village dates back to 1596. The Samogitian noblemen, who have been flourishing here, have left the calm nature harbor for today’s generations. In the center of the village there is a cemetery covered with deciduous trees and ornamental shrubs. In the center there is a chapel with two beaten crosses. Today’s community of Uikiai village is not very large, but united: in 2000, the village community built the statue of Christ with the inscription “Christ, bless the people of the Uikiai village” (author Antanas Murauskas). In Soviet times in Uikiai village, a sauna was built on the orders of the functionaries, so an asphalt road paved towards it. 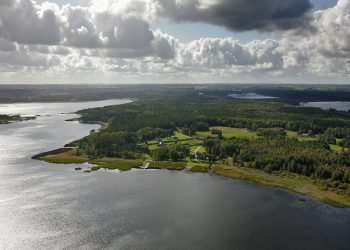 Plinkšiai lake is 5 km south-east from Seda township. Its area is 346 hectares, the length of the south to the north is 5.5 kilometers, the maximum width is 1.5 kilometers, the maximum depth is 11.7 meters (south), the average depth is 3.6 meters. The shore line is very wavy. It is a low marshy terrace, and marshy woods in the eastern, southwestern and northwestern coast. Tributaries of the Juodė river (from the Lake Gudonas), Markija river, Domija river, Šilupis river, Šaltininis brook,   Šerkšnė river (the left bank of Venta river) flows out. There is a 20-60 m wide line of reeds and hinges on the shores. Surface is 110 meters above the sea level. There is planty of fish in the lake. Abundant of rare and valuable fish species such as zander, catfish, eel, pike, ropes and other species. In Soviet times, Plinkšiai lake had a lot of fish, therefore, it was organized and allowed the commercial fishing with nets. There are the following villages near Plinkšiai lake: Plinkšės, Užpelkiai, Pamarkija, Paplinkšė, Uikiai. Plinkšiai lake belongs to the landscape reserve. Plinkšiai Reserve – Landscape Reserve of Mažeikiai and Telšiai regions. Municipalities, 5 km south-east of Seda township, south of Plinkšiai village. Area – 1231 hectares. The Reserve was founded in 1974. Protected are East Samogitian plateau natural complexes, natural and cultural complexes. The Least water-lily grows in the lake. Military orchid, Northern firmoss, Lesser twayblade, Blue moor-grass is being harvested on the margins of the mire. Great bitterns, gray ducks, montagu‘s harriers, western march harriers, corn crakes incubate there, in the woods – black storks, grey-headed. Pairs of white taled-eagles and ospreys are being observed annually. The black grouse cock which is recorded in the Lithuanian Red Data Book can be seen incubate in the Užpelkė woods. Protected area is inhabited by otters, American minks, badgers, rare bat species, recorded in the Lithuanian Red Data Book. 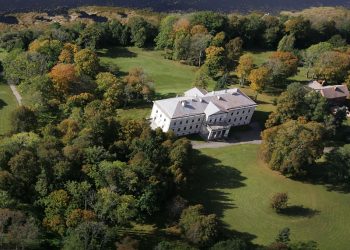 The first knowledge about Plinkšiai Manor dates back to the year 1717. According to the surviving written sources, it was supposed that Konstantin Broel Plateris (born in 1847 in Šateikiai village, died in Plinkšės village, 1899) built the palace of the two-storey late classicism Plinkšiai Manor on the lake. It is believed that immediately after the marriage (about 1870) he began to build his residence in Plinkšės village. It is believed that the German Rozenbank of Liepaja led the construction of the palace. Who is the author of the project is unknown. A beautiful park was built around the palace. Platerry’s homestead consisted of three parts: a representative manor core, a garden and a part of the houdehold. The main building consisted of two thirteen-axis facades, which were almost identical, in the center of the mansion – three-sided protrusions, joined by triangular fronts. Columns and pillars supported by huge terraces with balustrades. After the death of Constantine Plater, the manor was inherited by his eldest daughter Olga, whose husband was Iljinsky-Kašauskas living in Poland. After the First World War (since 1918), the manor was dominated by his Commissioner D’Ersevilis. When O.Kašauskienė died, he became her patron saint of her daughter Marija. 1934 The estate center was bought by the Ministry of Agriculture and established an Agricultural School here (later it was reorganized into a technical school, which closed in 1977). 1981 Manor passed to the company „Mažeikių Nafta“ (Mažeikiai Petroleum). 1983 – 1987 The company built a sanatorium on the territory of the manor park. Tomb of the Count Constantine Platerier (1847 – 1899), left by Plinkšiai Lake. It is said that the Count was buried in Swedtomb, and at night the relatives secretly brought him to the common grave of the family. The wife did not know it and built a monument. It was fenced to the fence, and the grave was planted with trees. Access to the grave is planted on both sides by fir trees. 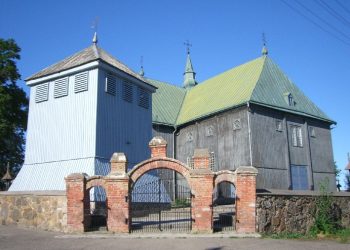 Seda is the town of Mažeikiai region, the center of the locality, and is located 24 km from Mažeikiai town to the southwest. It stands at the intersection of seven roads (roads to Telšiai town, Mažeikiai town, Plungė town, Renavas town, Rubikai village, Navarėnai village). Kazimieras Būga brought the name of Seda town from the water reservoir – the nearby Seda Lake (also called Sedula Lake). There are two wooden churches in Seda town: Assumption of the Virgin Mary (from 1770) and St. Jonas Nepomukas (from 1783) – architectural monuments. Seda town with a network of streets, a plan of the square, and fragments of the building has been included in the list of local significance urbanization. This has been mentioned since the XIII century. XV century it began to be known as an agile border with Livonia shopping center. At the estate of the XVI century there was a church built and in the 1500 it became a Seda township and in 1508 parish of Seda township was founded. In 1655 it has been given market and trade privileges. Urban development was driven by a strategic situation – along the road from Livonia to Samogitia. XVII century in the middle and during the Northern Wars it was badly damaged in the 18th century in the second half recovered, since 1780 received a new trade privilege (referred to as a town). 1765 a new road was built, and the current street of the Church began to be formed. 1914 On the pine piles there are all houses on the left bank of the Sedula stream. After 1831 the rebellion, in which the then owners of the Seda town of Sapiega actively participated, were taken away from their towns and transferred to the state. The inhabitants were also active in 1863. uprising – distributed a banned print. In 1855 bishop and poet Antanas Baranauskas worked in Seda town, after whose name was the central square of the town named. In 1999 the square was arranged. In 2000 A.Baranauskas bust was built in Seda town (autographed by Osvaldas Neniškis). In 2004 July 16th the city’s coat of arms was approved by the Presidential Decree. 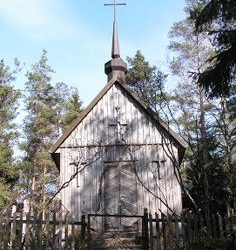 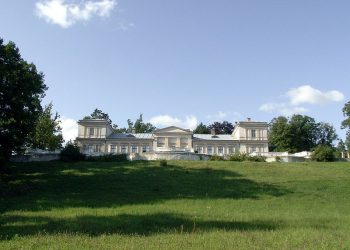 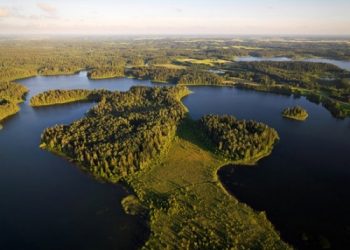